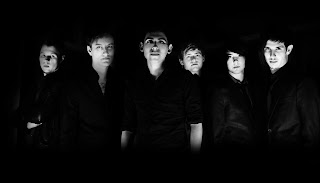 Dallas, TX’s Crown The Empire have signed with Rise Records. Detials for their debut full-length will be announced shortly.

The official music video for their song “Voices” can be viewed here: www.youtube.com/watch?v=xyEO8wgsQBM.

Check out the band’s signing announcement here, which includes a link to download their cover of Maroon 5’s “Moves Like Jagger” for free: http://www.youtube.com/watch?v=dkGlxCiGzfI.

About Crown The Empire:

Crown The Empire is a 7-piece band from Dallas TX. Starting in 2010, the band set out with a goal to separate themselves in a genre often cluttered with copy-cat bands. They combined their love for the hardcore genre with infectious, loud, and powerful choruses of generations before their own, and ultimately created a fresh new approach to heavier music. Combined with an equal drive to connect with every last one of their fans, they hope to use whatever notoriety they receive to spread a simple message of belief in yourself, and hope in others. Their debut EP Limitless released in November of 2011 furthers this idea of zero boundaries on what you're capable of, and has even spawned the name for their fans: "The Limitless". Crown The Empire is geared up for an even more impressive 2012. Armed with new music, new members, and an unrivaled work ethic, the band hopes to take over the hardcore scene, and eventually become one of the major players in rock and roll. Never forgetting that they too are "Limitless", Crown The Empire is a force that shows no signs of stopping.