Reviewed! Queen - Days of Our Lives 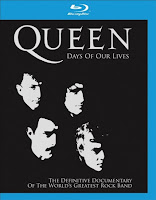 There’s a reason that when Queen: Days of Our Lives first aired in two parts on BBC that is garners three millions viewers  - it’s just that good. If there ever was a definitive Queen DVD release, Queen: Days of Our Lives is about as close as it gets, a release that spans nearly the entire length of Queen’s length canon. Queen: Days of Our Lives starts way back with current Queen members Brian May and Roger Taylor first playing together in Smile, before delving deep into the highest highs and, unfortunately, the lowest lows of the life and death of enigmatic frontman Freddy Mercury. The DVD features some deep cut footage from the venerable act, including the bands 1974 appearance on Britain's Top of the Pops music show (recently discovered footage, some of which hasn’t been seen in over 30 years), a heaping handful of the band’s music videos complete with behind-the-scenes vignettes and other footage, as well as bits and pieces of American tour footage, as well as footage of the band touring in Japan. Queen: Days of Our Lives houses all of that footage, and that’s not even to mention the interviews included (the Blu-Ray edition contains bonus interviews). Fans can also see the band profess their love of Scrabble of all things as well as May giving viewers a visual tour of Imperial College, the place where he first met Taylor. Queen: Days of Our Lives will satisfy even the most die-hard of Queen fans, a DVD that goes without saying is a definite must-see.