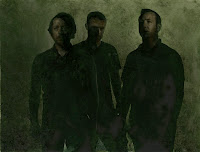 Relapse Records is extremely proud to announce the signing of experimental, dark ambient / noise trio Locrian. Locrian formed in late 2005 and consist of André Foisy (Electric and Acoustic Guitars, Arp Avatar, Electronics), Terence Hannum (Vocals, Synthesizers, Piano, Organ, Mellotron and Tapes) and Steven Hess (Drums, Electronics). The group, located in Chicago, IL and Baltimore, MD has released over 20 recordings on an eclectic array of labels in their relatively short but prolific career, including a recent split with label-mates Horseback.

Locrian plan to enter the studio later this year for their full-length Relapse debut. Furthermore, this summer Relapse will reissue the group’s most recent vinyl only release The Clearing as a 2CD/Digital deluxe album with a bonus disc re-titled as The Clearing/The Final Epoch. More details on the reissue and the new album will be available shortly.

André Foisy commented on the new collaboration with Relapse:

"It's really an honor to be working with one of the labels that we grew up with and a label that's put out such a wide variety of material that we love. We plan to record our full-length album for Relapse later this year with Greg Norman at Electrical Audio in Chicago."
Email Post
Labels: locrian relapse records signing