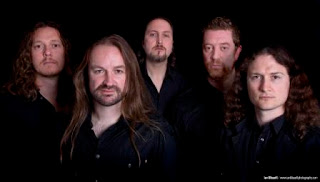 InsideOut Music is proud to announce the worldwide signing of the progressive metal band Headspace.

Headspace keyboardist Adam Wakeman (also of OZZY OSBOURNE, and son of Yes' Rick Wakeman) comments about the signing: "We are so pleased to be joining forces with InsideOut. We have spent a long time making sure that this album is exactly how we want it; and to have a label behind us that fully understands where the band is coming from and what we're about is incredibly important to us. It's a perfect match."

The band began as a way for Wakeman and a close circle of his musician friends to reconnect. There were no preconceptions of launching a progressive metal band, and certainly no visions of grandeur-- they just played music that they loved. "We're quite open about our influences because that's the music that we love," the band comments. "There's Rush, Yes, Genesis, a lot of bands. We even give a tip of the hat to Dream Theater in a few sections. That's all a part of what we are."

This impromptu collaboration amongst friends quickly turned into something more serious, leading to the official formation of Headspace and the completion of their debut album, I Am Anonymous, which will soon be released through InsideOut Music. In regards to I Am Anonymous, the band comments: "Indeed, with players like keyboardist Adam Wakeman, vocalist Damian Wilson (Threshold, Arjen Lucassen), bassist Lee Pomeroy (Rick Wakeman's Ere, It Bites), Headspace is destined to go in an 'unashamedly prog' direction. People may be surprised to find, however, that for a band led by a keyboardist and vocalist---at least on paper---I Am Anonymous is a heavily guitar-oriented record."

Guitarist Pete Rinaldi and drummer Richard Brook round-out the band's line-up, making Headspace a progressive metal powerhouse in the music world. Look out for their debut, I Am Anonymous, coming this spring!