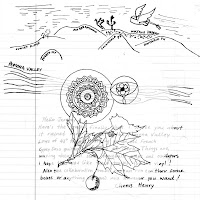 There has been a tradition going back to almost the begin of Shrimper of artists on the label collaborating with one another. From John Davis/Lou Barlow's Folk Implosion to Franklin Bruno & John Darnielle's Extra G/Lens with dozens of other examples in between. This Split LP between Woods and Amps for Christ began as a kernel for a split 7" single but grew into this full length split LP featuring 4 songs by each artist and an additional collaborative track.

Woods and Amps for Christ explore a lot of the same land mass as one another, but manage to turn over different rocks & shards of glass. Working independently from one another, you will hear the sublime manner in which the 2 sides of the LP complement one another both musically & lyrically. Check out the ESP interplay of Barnes & Earl when together or separated by coasts.

Woods and Amps For Christ will release their self-titled split via Shrimper April 17.