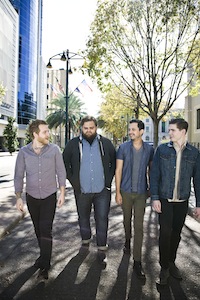 TALLHART (previously known as Marksmen) will release their Equal Vision Records/Rory Records debut EP in Spring 2012. The album was recorded in Tampa, FL with Bemis, Tim McTague (of Underoath), and Dean Tidey (of Feeder) serving as producers.

Leading the EP will be the track “Fever (Sister Of Mine)”, which will be released on March 6th as a digital single. This album will be the follow-up to two previous self-releases put out under the name Marksmen, The Blue and Grey EP (2010) and their full-length album Sister of Mine (2011).

“They are TALLHART. A brilliant young band from Tampa who can write a stadium rock-level anthem like nobody's business but don't shy away from lovely, dense songwriting. They also put on a sickeningly great live show,” Bemis expounds. “To me, they combine the best elements of early U2, Manchester Orchestra and sort of a young Pearl Jam (that last one is a pretty weird call, but I stand by it): basically, smart and brave music, rich with a swelling, unfiltered feeling. I'll be working closely with them on many aspects of their music and the record, and am extremely excited for the release of their EVR/Rory Records debut EP.”

TALLHART vocalist Matt Segallos reflects on the new partnership stating, “I feel like EVR has put out genre defining records over the years…so for them to want to work with us is exciting to say the least…and once things became clear that EVR was ready to make this happen, it was cool to see that Max was really on our side.”

He continues, “I just really feel like it's rare for someone of his standing to really fight for an up and coming band because he believes in the music so much. It wasn't like we were long time friends so he threw us a bone he just genuinely wanted to help us take the next step. I'm always thrilled to work with someone like that. Plus, everyone knows how creative Max is; to have him involved in our work is a real pleasure.”

Guitarist Chris Brickman, drummer Reed Murray and bassist Glenn Espinoza collectively create a perfectly balanced musical framework that showcases Segallos’ potent mix of lyrical musings on the light and dark sides of life, love, and spirituality – all delivered through his distinctly soulful, and subtly southern, croons. Through rich guitar tones and pure lyrical eloquence, one can simply feel the sincerity and depth of the band’s emotionally charged music.

The band was named one of Tampa’s “2011 Ultimate Local Artists” by the Tampa Bay Tribune/ St. Pete Times and has shared stages with the diverse likes of Anberlin, Underoath, Panic! At The Disco, Paper Tongues, Rooney, AWOLNATION and more.
Email Post
Labels: equal vision signing tallheart