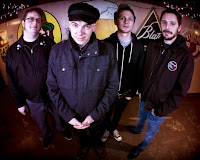 Now streaming is the band’s first released song, “A Failure of Epic Proportions.” The song will be featured on Break Anchor’s first release, a three-track, 7” vinyl EP called Blackhearts and Blackouts.

Blackhearts and Blackouts will be released through Paper + Plastick Records on March 20. Backing Navarro in Break Anchor is bassist Cris Golan (The Story So Far, King For A Day), guitarist Kyle Green (Seized Up) and drummer Dan Stover (Seized Up). Navarro, no stranger to Paper + Plastick owner and Less Than Jake drummer Vinnie Fiorello, it makes sense that Break Anchor’s first release would be with the label.