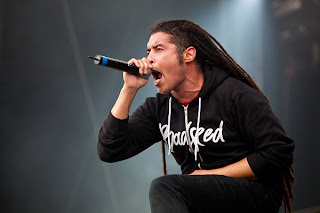 Elias Soriano comments, "We're proud to officially announce the new members of Nonpoint. Dave Lizzio, Rasheed Thomas and Adam Woloszyn have been chased by bands in the Chicago area for years and somehow by a stroke of luck and timing, we now have three of the freshest, most talented players on our team. These guys are great players and even better people. From day one, the new writing process has been full of great ideas and open minds, and now adding Johnny K into the formula has Robb and I very excited. After listening to the demos, Johnny K said, 'It's easy to find someone to play guitar for a band. It's hard to accomplish what you have by finding Dave, Rasheed and Adam, and that's finding people who can write amazing riffs.’ From that point on I knew: This new lineup and record will be epic in the chronicle of Nonpoint. ONWARD AND UPWARD!!"

Formed in 1997, Nonpoint has since released eight full-length albums and one live album selling over 750,000 albums in North America. With over a decade of extensive road work under their belts, the band has toured with All That Remains, Mudvayne, Papa Roach, Sevendust, Disturbed, Flyleaf, Buckcherry, Drowning Pool, Stone Sour, and Hell Yeah and graced the stages of Ozzfest, Rock On The Range and Summerfest. Additional career high marks include Bullet With A Name peaking at #22 on the Mainstream Rock charts as well as being featured on the game “WWE SmackDown vs. Raw 2007” and in the 2007 film The Condemned. The band’s cover of Phil Collins’ “In The Air Tonight” was the theme song for the movie Miami Vice and also landed them on the Mainstream Rock charts.
Email Post
Labels: news nonpoint