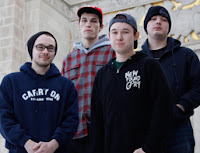 "We're fast pop-punk; we write songs we'd want to listen to." NO TIDE Vocalist/Guitarist Will Conner doesn't sugarcoat it one bit - he understands exactly what his band is, and what you'll love about it. True to the scene's spirit, these four have been infiltrating the underground Lincoln, NE scene since their high school days with a healthy dose of DIY spirit. On their own, the band has toured seven states and self-released a full-length.

Now with ANCHOR EIGHTY FOUR RECORDS, the band should make waves with their new EP, I Hope I Don't Get Left Outside. Produced by Defeater's Jay Maas (Transit, Polar Bear Club, Title Fight), the EP packages everything you'd ever want from the genre - aggressive vocals, meaty riffs, catchy hooks, and rhythms fast enough to make your head spin. Label owner Cody Jones isn't wasting any time here - the EP will be available digitally FEBRUARY 21 via all online retailers.