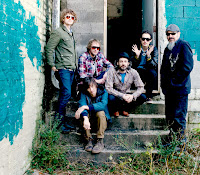 Partisan Records is very excited about the overwhelmingly hot reaction to Diamond Rugs' new music at strip clubs across America. Before journalists and members of the music industry had the chance to stroke the tantalizing album made by a collaboration between John McCauley (Deer Tick), Robbie Crowell (Deer Tick), Ian Saint Pé (The Black Lips), Steve Berlin (Los Lobos), Hardy Morris (Dead Confederate) and Bryan Dufresne (Six Finger Satellite), employees and patrons of over 50 strip clubs were tipped to the great sounds by being sent three CD singles with one song each from McCauley, Morris and Saint Pé. Poles show that everyone felt the project really has legs and could see the band's career as being long when they hit the road hard.

Diamond Rugs' debut self-titled record, due to be released April 24, was named Paste magazine's #1 Most Anticipated Record of 2012. The first song, "Christmas In A Chinese Restaurant," was offered as a free holiday download in December. In January, the first single, "Gimme A Beer," was posted and a live video of "Gimme A Beer" from the only show the band has played to date was filmed and edited by Zach Wolfe. The high-energy clip is cut from a multi-camera shoot that took place at The Earl in Atlanta, GA, on December 29, 2011. The elegant chaos depicted only scratches the surface of what the lucky few hundred were privy to during the band's two-hour-long set.
Email Post
Labels: diamond rugs free music free music friday