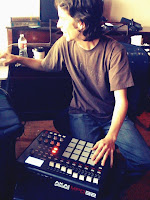 David Vincent Reep isn't really from any one place. The young musician has already lived in Colorado, Texas, London and California in his lifetime. The son of working parents, music wasn't something that held prominence in the house during his formative years. Through some combination of intuition, curiosity and boredom during his seven year stay in London, David picked up an acoustic guitar and dove into the world of the blues and soul music for a while. He was also an avid skater at the time, spending hours in Southbank, London, with occasional trips to the infamously dreary Elephant and Castle area (that place that would later become his music moniker). Upon return to the U.S., David was enamored with the rave scene that had spawned here and recalls being captivated with DJ Shadow's music. It was during this time that he first picked up the SP-303 and began to experiment with his own musical ideas.