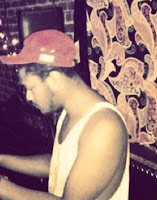 For Fred Warmsley, the man behind First Person Shootr, inspiration spawns from riding in his Mothers Camaro as a child in the early 90s hearing musicians like the Deele, The System, and Tony! Toni! Toné!

The First Person Shootr experiment, which began in the Spring of 2011, has blurred ambient instrumental, minimal, and 2 step, with traces of the R&B sound Fred used to hear in his mother's Camaro. His first EP will be released via Lefse Records in February.