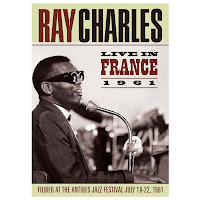 The 1961 Antibes Jazz Festival, which let French (and European) audiences hear Ray Charles for the first time, is the setting for Ray Charles: Live in France 1961, a new DVD offering that mashes up bits and pieces of those four historic performances from July 18-22, 1961. At first glance, you’ll notice that a number of repeated tracks, and while that might not look good on the surface, it’s always important to not judge a book by its cover, because in the case of this Ray Charles: Live in France 1961 DVD, the songs are different each time out. The July 22 performance comes across with more energy and exuberance than the July 18 set (only the 18 and 22 sets are presented in full as songs from the 19th and 21st performances are bonus), highlighted by the DVD’s two best cuts, “Let the Good Times Roll” and “Ruby,” which showcases Charles’ ability to croon with the best of them. Charles wraps each set with the endearing “What’d I Say,” and you’ll be hard pressed to not come away with a smile. Ray Charles: Live in France 1961 presents fans a rare opportunity glimpse into what it was like to experience Charles in a live setting, and chances are you’ll come away from this DVD more than impressed.