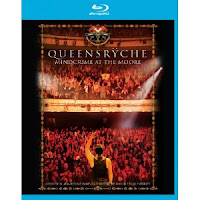 Queensrÿche: Mindcrime at the Moore is a double-album concert presented on stage, complete with actors, choreography, a multi-tiered set, and video footage, and for as cheesy, irreverent, over-the-top and perhaps unnecessary this presentation is, it’s also kinda awesome. From the outset, which features the band taking the stage in bombastic fashion alongside the Seattle Seahawks drumline, frontman Geoff Tate, both the lead singer and main actor of Queenryche’s little show, is at the top of his game, sounding literally as good as he ever has. The band doesn’t waste time talking to the audience, instead opting to plow through gobs of hits songs, actor interaction and costume changes. It’s epic to say the least. As any fan of the band will, or should, know, Operation: Mindcrime is the superior work to Operation: Mindcrime II, so the first portion of Queensrÿche: Mindcrime at the Moore outplays the latter. Opening with the likes of “I Remember Now” and “Anarchy-X,” Queensrÿche: Mindcrime at the Moore is off and running, and, as has been said, Queensryche rarely slows, or faulters for that matter. Bonus footage includes an alright tour documentary, footage from Ronnie James Dio giving a cameo performance of "The Chase" at a staging of the concert in L.A., and clips from Queensrÿche's "Rock & Ride" fundraiser from VH1. At times Queensrÿche: Mindcrime at the Moore can be a tough pill to swallow, sure, but for as corny as this shtick can get, it’s a ride worth taking.