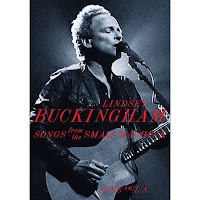 While Lindsey Buckingham might get all of the credit in the world, and the loads of accolades that come with it, for helping to drive Fleetwood Mac to worldwide superstardom, he never really gets the credit he deserves for his solo career, one that allowed him to flex his songwriting muscles. Luckily for you, well, luckily for all of us, we now have visual documentation of such with Lindsey Buckingham: Songs from the Small Machine, a Buckingham solo concert filmed at the Saban Theatre in Beverly Hills, CA. Predictably, there are a couple of Fleetwood Mac works tossed into the set, including “Tusk” and “Go Your Own Way,” the latter which should have you up and out of your chair and dancing along – just like the crowd literally dancing in the aisles on this night. But the former is not to be missed as the USC Marching Band makes an appearance to lend a hand to the proceedings. “Shut Us Down” is ridiculous and should leave you scratching your head as to how Buckingham is this good with a guitar in his grasp – something also highlighted by the brilliant close up camera shots of his playing. A 30-minutes interview makes up the bonus material, and while it doesn’t really offer anything new and anything you haven’t heard before – hearing Buckingham talk about his history with Fleetwood Mac is definitely something worth seeing for yourself. While you probably know Buckingham from his time in Fleetwood, after checking out Lindsey Buckingham: Songs from the Small Machine it might be time to start recognizing his ability to survive on his own.