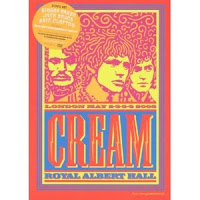 Cream’s Royal Albert Hall 2005 DVD is a wonderful presentation, a release truly as satisfying as the band themselves. And speaking of the band themselves, their ability to produce music that doesn’t sound as if its coming from a three piece band. Royal Albert Hall 2005 opens with “I’m So Glad,” which is a fine song in its own right though its comes across as outdated present day. The opening track isnt the only track that suffers from such a time warp, as other tracks like “Pressed Rat and Warthog" and "Deserted Cities of the Heat" sound better four decades ago. Still, a vast majority of the setlist on Royal Albert Hall 2005 comes across in stellar fashion, as the band sound spot on firing off one good track after another like “Spoonful,” “Rollin’ and Tumblin,’” and “Sweet Wine.” The slight tweaks to “Badge” work well, while the penultimate “Toad” and eventual closer “Sunshine of Your Love” go a long way in effectively and efficiently closing out this set. Royal Albert Hall 2005 houses a collection of alternate versions of some of the songs (“Sleepy Time Time,” “We’re Going Wrong” and “Sunshine of Your Love”), since the concert was recorded over four days. There are also interviews with the three members of the band in which they discuss the process of getting back together and performing again. To be honest, Royal Albert Hall 2005 isn’t all that special in itself, what’s special is seeing Cream live in all their glory, showing that like a fine wine, they only get better with age.