Nothing Fake About This Not Quite Super Group: A Conversation with Travis Miguel of Fake Figures 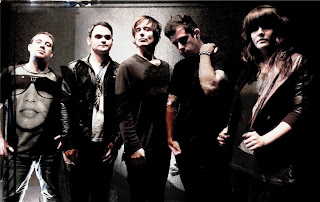 While they might appear to be a ‘supergroup’ to the naked eye, Fake Figures, a new project that features an all-star lineup of ex-members of bands the likes of Hotwire (frontman Rus Martin), Atreyu (Travis Miguel), and SS Nova and Scars of Tomorrow (Bob Bradley), it needs to be clear that this NEW band isn’t just a cheap ploy or quick cash grab – they are the real deal. Honestly, just check out their tremendous and powerful debut EP Hail the Sycophants, a powerful release that perfectly summates what this band is capable of. Seriously, make it a point to check this record out.

Looking for more information than I could shake a stick at, I sat down with guitarist Travis Miguel in order to find out more regarding the genesis of Fake Figures, what the band members previous band experience brought to this new act, anything and everything regarding Hail the Sycophants¸ and whether or not he considers Fake Figures anything close to a ‘supergroup.’

Get eXposed Music: Let’s start with something simple. Tell me about the origins of Fake Figures – how did this new project come to see the light of day?
Travis Miguel: We all basically know each other from our mutual circles of friends. I've known Justin Pointer (drums) since we were both in high school and played in a few bands together when we were younger. I've known Bob Bradley (bass) for a number of years through his time in Scars of Tomorrow. He approached me about starting a project, and being that we have pretty similar tastes in music, I jumped at the chance. Justin was pretty much the go-to guy to play drums.  They both played in a band called SS Nova (Editor’s note – definitely check this band out if you have the chance) a few years back. Looking for a singer is always a bitch of a task. We had people send in some "online auditions." Some were good, some not so good. Most were the generic "metalcore" stylings which we we're trying to veer away from. We wanted someone who sounded like "Rus from Hotwire," but trying to find someone who sounded like that would take forever, so we figured we'd just approach the actual guy. At first, I think he was slightly reluctant, but he heard the rough versions of the songs we had and he jumped on board. Originally it was just going to be a 4-piece, but the songs just kept getting more and more layered it would sound lame and empty if I were to try to pull it off by myself, so we called our old friend Heather Baker to join the fold.

GEM: Zoltan Bathory once told me he considered Five Finger Death Punch as a ‘supergroup.’ Since Fake Figures boasts ex-members of the likes of Atreyu, Scars of Tomorrow and Hotwire, do you consider yourselves a ‘supergroup?’ Have you guys even tossed that word around? 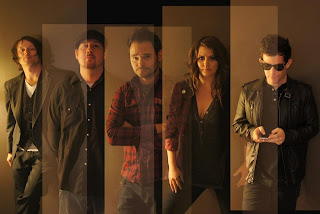 Miguel: Nah.  I don't personally. We're just friends who are making music together. It just so happens we play and have played in bands before. Nothing very "super" about it really.

GEM: Looking at Fake Figures as somewhat of a new beginning, is this band the case of, if you could go back, there are things you would change? Meaning, since all band members have had experience in touring bands, were things done differently with this band? Did everyone take a different approach to it?
Miguel: We haven't really been a band for very long so it's hard to say if we'd do anything differently. But being that we all have a bit of experience, we know what not to do...kinda. There's no real "right" way to go about being in a band, but there are definitely "wrong" ways.

GEM: Moving onto Hail the Sycophants, let’s talk about the recording process of this record. Given all of the member’s individual experiences recording albums, was this one particularly smooth? Walk me through the process.
Miguel: We've all had rather extensive experience in the studio, and being in the studio can be exhausting, but recording Hail the Sycophants went pretty smoothly. It was recorded in Orange County, CA by Pete Charrell at his Dexter Dog Studio. Only a few things here and there changed in the songs from the demos to the actual EP. It was mixed by Shaun Lopez at his Airport Studios in LA and mastered by Paul Miner.

GEM: Focusing on the album title – Hail the Sycophants is a fairly loaded phrase that could mean a variety of things. Any chance you could let us in on the story behind the title?
Miguel: You'd have to ask Rus about that one. He's pretty vague with lyrics and titles.  A "sycophant" is basically a self-seeking, ass kissing parasite, so make of it what you will.

GEM: What influenced the sound of Hail the Sycophants? There are instances throughout the EP in which you can hear inklings of band member’s prior affiliations, but there’s more to it than that.
Miguel: Kinda hard what to say influenced the sound. It's definitely a bit more stripped down. It's heavy but not for the sake of being heavy...more of a vibe. It ain't rocket science. If you've been eating pancakes and syrup for breakfast for x-amount of years, if given the opportunity to have something different, you might wanna try an omelet or even waffles. I've seen a couple of posts saying, "...but it doesn't sound like Atreyu..."  Well, yeah…no shit genius.

GEM: The EP is brimming with anthemic tracks full of hard-charging guitars and shouted vocals, but no matter how heavy a particular song is – melody never seems to be sacrificed. Was it a conscious effort in the studio to keep a healthy dose of melody in these songs? 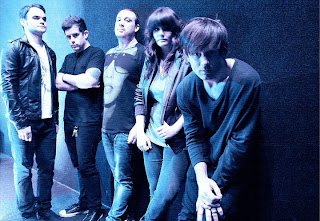 Miguel: I don't think it was a conscious effort; it just kinda ended up that way. I don't think I've ever met anyone that refuses to listen to anything with melody. If there actually is someone out there like that, they're missing out on a lot. But with that being said, the louder and more aggressive side of music will always be embedded in us and in this band in some way, shape, or form.

GEM: How about a question sure to be on the minds of many fans – will you be touring soon?
Miguel: We have a few shows in California in early 2012. We're gonna try to get out there as much as we can.

GEM: And speaking of questions on the tips of tongues, are plans for a full length in the works?
Miguel: We've been focusing on spreading the Hail the Sycophants EP word out there for now. But we have been bouncing a lot of ideas for songs around. Soon enough well be working on an LP.

GEM: Anything else you’d like to add?
Miguel: Hail the Sycophants EP is out now! Go pick it up...if not for me, for all the starving children out there...
Email Post
Labels: fake figures interviews