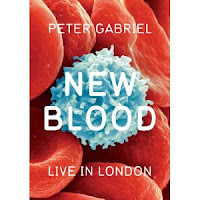 Keep this in mind: Sure, when looking at the back cover of Peter Gabriel’s latest DVD offering, New Blood: Live in London, Gabriel’s looks may have changed, but his voice, his swagger, definitely have not.  New Blood: Live in London finds Gabriel doing what he does best, entertain audiences, and even at the ripe age of 62 years old, Gabriel is gripping when onstage during this DVD offering. For the casual Gabriel fans out there, you might want to look elsewhere for your entertainment, as the songs here have mostly been rearranged to the point of being almost unrecognizable from their original counterparts. For Gabriel enthusiasts, is probably a wet dream for you, as these songs; however miles they might have on them by now, are presenting in a fresh, new and engaging manner. Gabriel’s rendition of Paul Simon’s “the Boy in the Bubble” is one of the DVD’s highlights, as are songs like “the Book of Love” and retro radio staple “Solsbury Hill,” though the notable omissions from Gabriel’s longstanding body of work are a little disheartening (“Shock the Monkey,” “Sledgehammer”).  The lone bonus feature here is a short backstage feature titled "Blood Donors" that features interview clips with Gabriel, some of his bandmates, and conductor Ben Foster (who you may know as composer/arranger/conductor on Doctor Who). New Blood: Live in London is a worthwhile watch, and you have to give a veteran like Gabriel some amount of credit for at least trying something new.