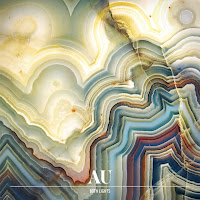 Portland's AU is releasing its third full-length album, Both Lights, on Hometapes on April 3 and in the UK via The Leaf Label on April 2.

AU's third album, Both Lights, is a recurring dream. Eleven songs made by the Portland, Oregon-based duo Luke Wyland and Dana Valatka, it's a story of time. Three years to be exact: since their critically-acclaimed 2008 album Verbs and its 2009 EP evolution Versions, there's been a long exhale. A little defiance of the double-speed countdown of the indie hype clock. And a hell of a lot of living. Turn it on. More than a mere accompaniment, it's a gleaming mirror. It's an exaltation, an exhalation, a monument of extreme composition, the child of collaboration and isolation, a preamble to a wild live show, a statue intact in the violent wind of art and commerce, and, simply, a record about love. It's for itself, and, in being that, it's an album that can be understood like a person. "It's the topography of me," says Wyland. So you follow the coordinates.