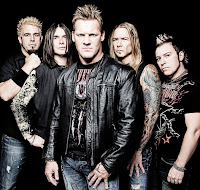 Century Media Records are proud to announce the signing of internationally-renowned metal band FOZZY. The brainchild of Chris Jericho and Rich Ward, Fozzy was formed a decade ago out of a passion for hard rock and heavy metal and has transformed into one of North America's most electrifying bands.

"We are so excited and honored to be part of the Century Media family," says Chris Jericho, an entertainment icon who has achieved legendary status as one of the WWE's most acclaimed superstars, penned two New York Times best-selling autobiographies, and was a finalist on ABC's hit television show Dancing with the Stars in 2011. "Fozzy finally has a record company with the firepower and worldwide influence we need and deserve to rise to the next level - Century Media is the perfect home for Fozzy, and we are stoked to release the masterpiece album of our career and conquer the world... and elsewhere!"

Chris Jericho will discuss Fozzy's signing to Century Media Records tomorrow morning at 9am PST (Thursday, January 19, 2011) on the legendary Los Angeles radio station 95.5 KLOS, where he'll appear live on the Mark and Brian morning show. To listen live on the internet from around the world, click here.

Fozzy - lead singer Chris Jericho, guitarist Rich Ward, drummer Frank Fontsere, bassist Paul DiLeo and guitarist Billy Grey - will release their Century Media debut worldwide in summer 2012. The album will be the follow-up to their acclaimed 2010 release Chasing The Grail, which saw them tour 15 countries around the world and perform in cities from Los Angeles to Lichtenvoorde, including an appearance alongside metal's Big 4 - Metallica, Slayer, Megadeth and Anthrax - on the Knebworth Sonisphere, and a string of dates on the 2011 Rockstar Energy Drink Uproar Festival headlined by Avenged Sevenfold.

"There are very few musicians I respect more than Rich Ward, and I couldn't be prouder of bringing him home to Century Media Records, the label that introduced me to Stuck Mojo in 1995," says Century Media Records product manager Paul Gargano. "Chris is one of the most captivating entertainers and electrifying frontmen I know, and Fozzy have emerged as one of the best-kept secrets in hard rock and metal over the years - now it's time to let the secret out..."

"Shortly after my 12th Birthday, while air-guitaring to Iron Maiden, I decided that when I grew up, I wanted to 'pay my bills' by playing guitar," says Ward. "In 1995, Century Media Records allowed this seemingly unreachable goal to become a reality with my band Stuck Mojo. When that relationship came to an end in 2001, I continued making and releasing music with several different bands, through several different record companies. There was only one common thread in all my experiences with these other organizations - I wished they were more like Century Media."

"The truth is, like any 'first' relationship, it's tough to get a real perspective of how good it really is until you've had other relationships to compare it to. After having lots of opportunities to gain some perspective, I am honored to return to Century Media Records as they become the home for Fozzy's music. I'm so grateful to be able to play music for a living, and it is a privilege to continue my career with the label that gave me my start."