Scum of the Earth signs to Goomba Music 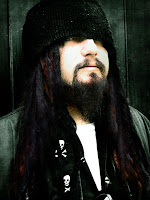 Goomba music announces the signing of Scum Of The Earth, the brainchild band of former Rob Zombie guitarist/song writer Riggs. The new album (title to be determined) is set for a 2012 release and is a follow up to 2007's highly acclaimed Sleaze Freak. Riggs is currently writing material for the album and plans to be in the studio by the end of the year. "The new material is like classic SOTE material being possessed by demons with a modern twist " states RIGGS "I'm excited to get into the studio and start recording. There will be some crazy tracks on this one!"

Scum Of The Earth was formed in late 2003 by former Rob Zombie guitarist Riggs while Rob focused on his movie career. Being the brainchild of Riggs, Scum Of The Earth's music focused on a horror/heavy rock theme which he has helped incorporate during his time in Rob Zombie.

The band released Blah Blah Blah...Love Songs for the New Millennium in 2004 which met with much critical acclaim. The follow up, 2007's Sleaze Freak was also well received and landed album cuts in many movie soundtracks and video games.

In November 2011 Scum Of The Earth signed with Chicago based Goomba Music. The approach being a partnership in which Goomba and Riggs could develop the band and new album in a state of the art fashion. The new album promises to be a step in a new and modern direction while staying true to the roots and original concept of the band. Riggs describes the new material as "Classic Scum of the Earth with a demonic twist". The new album (title to be determined) is set for a 2012 release.
Email Post
Labels: goomba music scum of the earth signing