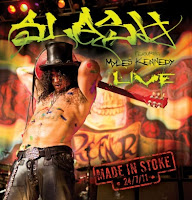 They say timing is everything. Isn’t it ironic that Slash, former Guns N’ Roses guitar virtuoso, would release his first ever solo live album, Made in Stoke 24/7/11, during a time in which his former day job band is back touring the States? That’s probably more calculated than it is a coincidence, but regardless, this double disc live release is a more than proper representation of what Slash is capable live, one that reflects a pretty good timeline of all the bands that at one time signed Slash’s paychecks.

Made in Stoke 24/7/11 is a mix of tunes from Guns N’ Roses, Slash’s Snakepit and Velvet Revolver, with Slash on guitar (dude, obviously), and Alterbridge frontman/Slash oft-collaborator Myles Kennedy at the helm, playing the role of Axl Rose and Scott Weiland, less the booze/rehab/debauchery/baggage normally associated with those oft-maligned frontmen. Made in Stoke 24/7/11 also features Todd Kerns (Sin City Sinners) on bass, Brent Fitz on drums and Bobby Schneck on rhythm guitar. The set was captured at Victoria Hall in Stoke-on-Trent, England, the same town where Slash was raised.

Yes, Kennedy is talented on vocals, but keep in mind he isn’t Axl Rose, and although the renditions of GNR tracks on Made in Stoke 24/7/11 aren’t anything close to trainwrecks, songs like “Mr. Brownstone,” “Paradise City,” “Sweet Child O’ Mine,” “Nightrain” and “Patience,” they just don’t sound entirely complete. It is nice to hear “Civil War” performed live though, and I’ll give Slash credit for tossing it into the night’s set list. Perhaps it’s not his doing that GNR never performed this track? Hmm. On the flipside, Kennedy may just have submitted the best entry into Velvet Revolver’s search for a new singer with his dynamic performance on the track “Slither.”

Regardless of song origin, Slash and his backing band nailed most every note throughout Made in Stoke 24/7/11. And if you are among the many that didn’t get the chance to check out this tour when it was out hitting the pavement, don’t worry, because Made in Stoke 24/7/11 will go a long way to make you feel you were right there in the front row. Made in Stoke 24/7/11 is definitely one of the better live releases of 2011, hands down.