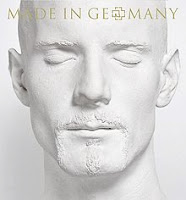 Made in Germany 1995-2011 represents Rammstein’s 17 years and six full length albums of existence and, to be honest, it’s about time the Germany metallers combined some of their best material into one album. From the second the boys appeared shirtless on the cover of their 1995 debut Herzeleid, things were off and running, and now, nearly two decades later, Rammstein is a band synonymous with militant German belligerence, pulsating metal grooves and all around general craziness. Made in Germany 1995-2011 is a proper depiction of where the band has been and what they have done – all wrapped up with a nice little bow.

Made in Germany 1995-2011 features six different covers, depicting each of the various band members' death masks, and features 15 previously released tracks, one new tracks and an entire record full of remixes. Well, the remixes aside, the first disc’s last track, “Mein Land,” is the lone new track offered here, but it isn’t the albums mains selling point, just merely one of them. Made in Germany 1995-2011 offers up Rammstein in their infancy, featuring one track from the band’s debut (“Du Reichst So Gut”), and two tracks from the follow-up Sehnsucht, predictably “Du Hast” and the albums opener, “Engel.” The bands latter records are well represented, including five tracks from the breakthrough record Mutter (“Links 2-3-4,” “Ich Will,” “Mein Herz Brennt,” “Mutter,” “Sonne”) and four from the following Reise, Reise (“Keine Lust,” “Mein Teil,” “Amerika,” “Ohne Dich”). Even two songs from Liebe ist Fur Alle da (“Pussy,” “Haifisch”) make their way onto Made in Germany 1995-2011. Now that’s a considerable Rammstein set list if there ever was one.

If there ever was a band that was in need of a greatest hits album, Rammstein surely had to be near the top of the list. Judging by how tremendously strong 2009’s Liebe ist fur Alle da was, it seems this band has a lot left in the tank, so it’s probably a safe bet that Made in Germany 1995-2011 is just the first of many greatest hits compilations to come from these German marauders.