Reviewed! Jeffery Nothing - The New Psychodalia 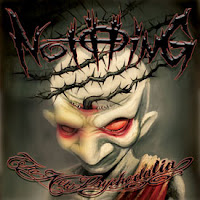 Though there are inklings of that tried and true Mushroomhead sound fans of the band revel in throughout frontman Jeffery Nothing’s debut the New Psychodalia, it should be noted right from the start that this is not Mushroomhead, nor is it ever really close. Sure, Nothing’s vocals should conjure up some warm and fuzzy feelings of nostalgia, it bear repeating that this isn’t just another MH redeux – this is something entirely new, and entirely different.

The New Psychodalia is experimental, sure, but not even Nothing’s far-reaching musical spectrum can’t
save the album from sounding completely disjointed. It should be noted that it’s this strive for sonic freshness that keeps the record from becoming stale and repetitive (something that can be said for some MH releases). You never quite know where the New Psychodalia is going, at one point there’s pounding tribal drums (“Deathbed Masquerade”) and acoustic guitars (“Psychodalia”), then at other points there’s nu-metal style vocoder vocals (“Enough”) and glam rockwrapped in a goth cloak (“Devil”).
Though it is admirable to see Nothing trying to separate himself from all of the things he’s done with Mushroomhead, the New Psychodalia doesn’t seem to sync, meaning that the vocals and music don’t match up.

Mushroomhead fans will surely flock to the New Psychodalia though they are probably better off avoiding it. There’s nothing really substantial that jumps off the record at you, and just ends up coming off as Mushroomhead-lite for the most part.