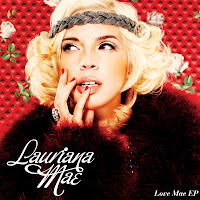 Inspired by the likes of Billie Holiday, Ella Fitzgerald, and Etta James, singer/songwriter, Lauriana Mae melds soulful jazz vocals with contemporary pop, R&B and hip hop music. Recently signed to Atlantic Records, Mae is set to release her debut EP entitled Love Mae exclusively to fans via her website on November 29th. The EP will then be available via all DSP's December 6th.

Mae collaborated with producer Kwamè (Christina Aguilera, Mary J. Blige) on the 3 song EP, which features lyrics and melodies penned by the singer herself. It kicks off with her anthem “Money Mae”- the singer’s moniker, a shiny, horn-laden throwback banger that captures flapper-era bliss. Also included is the melancholic ballad “Love”, a reflective conversation between Mae and the emotion itself, and the punchy, percussive track "Like A Drum (Beat It)".

Lauriana began singing at home inspired by her mom who spotted her talent at an early age. She joined the church choir, which gave her the confidence to audition for a performing arts high school where she was accepted at a young age, and majored in vocal music. Eventually, Lauriana began performing at local talent shows, auditioning for various gigs, and working with different groups. The experience gave her the confidence needed to enter the studio to record songs of her own, and to establish herself as a solo artist. With her backing band "The Pains", comprised of a band of friends that stood by her along the way, Lauriana is gearing up to break the mold of popular music. She is reinventing the essence of great soul music from the past and present and bringing it to fans in a way that is distinctly Mae.
Email Post
Labels: atlantic records lauriana mae signing