I Am War Signs to Razor & Tie 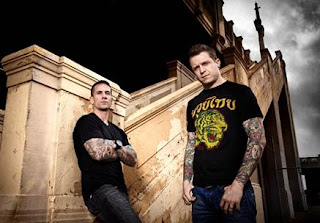 Razor & Tie announces the addition of newly formed, Orange County, CA based act, I Am War to its label and publishing rosters. I Am War joins Razor & Tie for an exclusive, multi-album, North American deal. The band is led by Atreyu front man Alex Varkatzas (on vocals) and Brandan Schieppati (on guitar and vocals). I Am War is currently writing and demo’ing new material which will encompass their brutal debut album set for release in spring of 2012.

“Brandan and I are extremely happy to sign with Razor & Tie. We feel like they fully understand the musical intentions of I Am War, and we couldn't be more excited about our future. I am personally looking forward to making the most extreme record I have ever been a part of. We are looking forward to creating an album filled with super aggressive, heavy, energetic metallic, raw, punky hardcore. The kind of music that boils your blood and inspires you to get up and move,” says Alex Varkatzas.

I Am War have posted a new demo version of “The Poisoning,” a track they’ve recently been working on. To listen, please click here: http://www.youtube.com/watch?v=44MOXnukPhw.

As a member of Atreyu, Alex Varkatzas sold over 1.7 million albums and toured extensively the world over. His music has been featured on numerous soundtracks including Mr. & Mrs. Smith, Underworld: Evolution and on the Madden NFL video game. Brandan Schieppati of Bleeding Through has sold over 300,000 albums worldwide and played in numerous bands since beginning his music career in 1999.

I Am War is the latest addition to independent label Razor & Tie’s rock roster which currently includes All That Remains, For Today, Saves The Day, P.O.D, Such Gold, Norma Jean, Chelsea Grin, Nonpoint, Attila, Hit the Lights, and more to be announced shortly. The New York City-based label is one of the fastest growing independent record companies in the United States, and has garnered both Platinum sales and Grammy awards in its 20-year history.

Email Post
Labels: i am war razor and tie signing