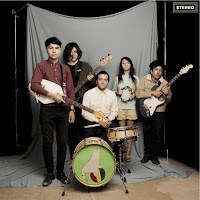 When Adrian Pillado formed Sea Lions in 2007, he wasn't really sure what it would be. His influences were something of a musical snowstorm, involving Crass, John Coltrane, Sun Ra, Syd Barrett, Lou Reed, Orange Juice, and K Records' flagship band Beat Happening. In the beginning, it was just Adrian singing and playing guitar, with his best friend Pat playing drums. Both had a history in Oxnard's D.I.Y. punk scene, but something new was starting to happen in that town. A group of young kids had been listening to a lot of K, Postcard, Sarah, Creation, and (naturally) Slumberland records; new bands started forming, and bands that were previously more into punk and noise started working in these new influences. Maria's Eric Bellow started YAY! records to document the Sound of Young Oxnard, and Sea Lions fit right in on the roster. The early days of Sea Lions were a learning curve, Adrian and Pat crashing and bashing their way through songs, often stumbling upon something beautiful in the process. Still, something was missing; a full band? more time to woodshed? They were always just teetering on the edge of something great, but when would it come?

Everything You Always Wanted to Know About Sea Lions, But Were Afraid to Ask is without question the next giant step forward for the band. A brief instrumental intro gracefully leads you into the galloping proper album opener, "I Should be Sleeping." The production throughout is shimmering, and assured. Something as simple as the backing "oohs" on the song "Grown Up," become transcendent. The use of toy piano at the beginning of the song could easily be cloying, but instead feels tasteful and necessary. And while that song talks about the familiar indiepop theme of not wanting to grow up, elsewhere on the album they reveal some very mature new facets of the band. Nowhere is this more evident than what may be the album's strongest track "As Times Change." While they do a wonderful job dabbling in minor keys and retro sounds that seem perfect for a haunted sock hop throughout Everything..., "As Times Change" reveals a confident band that knows how to mine their record collections (particularly their 13th Floor Elevators, and Love records) and turn all of those sounds into something entirely their own. The much-noted Calvin Johnson-like flavor of Adrian's voice is a great contrast to what has become a quite virtuosic band. Second guitarist Matt, and drummer Javier come from the punk scene of Adrian's youth, while bassist Kyle is a fervent Britpop fan, and often wears a button with an image of Radiohead's Thom Yorke.