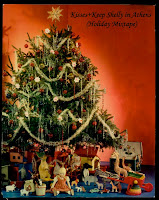 Kisses and Keep Shelly in Athens are giving out a holiday mixtape. The two bands became friends during a recent tour of the West Coast. Shortly after their tour together, Kisses' Jesse Kivel was in the LAX airport when he heard "My Favourite Things" by Panaphonic crackling though the speakers. Hearing the song inspired him to make a mix of smooth holiday grooves. After spending time with RΠЯ of Keep Shelly in Athens, Kivel knew he would be game to collaborate on the mix because, "he is the king of smooth," he says.