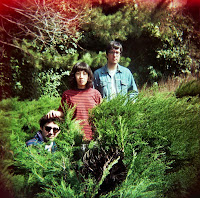 Let's talk about the Beets. The story of the Beets begins in scenic Queens, New York, where Uruguayan transplant Juan Wauters met Jose Garcia in art classes at LaGuardia Community college. The two started playing guitar together, and eventually found the first in a series of many drummers so that they could play shows under the name of... The Beets. Soon enough, Wauters and Garcia found another like-minded soul in Queens-based artist Matthew Volz. Volz quickly took over the visual needs of the band, creating flyers, album covers, videos, and light shows, in effect turning him into the secret fourth member of the band. Volz also plays recorder for the band from time to time.

Hardly Art is proud to present to the world Let the Poison Out, the third masterpiece from the Beets. It was recorded in two days, with a few overdubs here and there, at Marlborough Farms by Gary Olsen of Ladybug Transistor. It's the album the Beets have been working up to. Let the Poison Out also marks the addition of Chie Mori, an important component as the latest and last drummer for the Beets. It's true that the Beets have had many drummers. "If this doesn't work out, then no more Beets," asserts Garcia.