Taking a Stroll Down Park Lane: A Conversation with Carley Coma of Park Lane 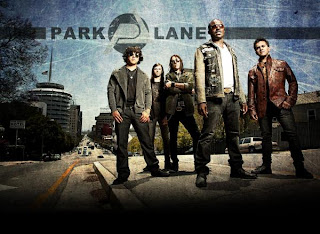 To steal a quote from our review of Park Lane’s excellent debut record Letters From the Fire, “from his days spent conducting frenetic and groundbreaking jazz/metal fusion (or “urban fusion” for those fans out there) act Candiria, to his short-lived, yet overlooked time in the promising Christian act Hope Kills Fear, Carley Coma has remained one of the most recognizable and talented throats in the game. And as frontman for his latest day job, the newly formed Park Lane, Coma continues to dazzle when a microphone is present, which is all too obvious on the band’s debut, the powerful Letters From the Fire,” which you can read here. And so it goes with Coma and each and every band he graces – Park Lane’s Letters From the Fire is a tremendous release and debut for the Bay Area rock outfit, one that immediately give the band not only legs to stand on in this crazy rock game of ours but also some street cred in the overall grand scheme of things. Suffice to say it’s a record that bears listening to. So do that. Now.

As is the case with us at Get eXposed Music, when we like something we crave more information. So we did, and in doing so sought out the frontman de jour himself Carley Coma in order to not only badger him about his previous (well, current actually – read on my friends) sonic affiliations but also find out probably everything there is to find out about Park Lane and Letters From the Fire.

Get eXposed Music: Let’s begin with something easy, shall we? Tell me about how Park Lane came together.
Carley Coma: Mike [Keller, guitar] and Grayson [Hurd, guitar] formed the band when they met in high school. The lineup has changed significantly since then. Clayton [Wages, bass] replaced their old bassist and Cameron [Stucky] replaced the previous drummer. I replaced the previous vocalist in January of this year. Everyone is willing to do what it takes to make things happen for the band.

GE: What is the status of Hope Kills Fear? Safe to say they’re a thing of the past now?
Coma: Hope Kills Fear is still active. The guys are in the studio doing pre-production for an
upcoming album while I am on tour with Park Lane. Both bands mean a lot to me so
I will take the necessary steps to keep everything balanced.

GE: And while we’re on the topic, any chance we’ll see a Candiria reunion down the road? (OK,
I’m done asking about your old bands).
Coma: Candiria is currently working on a new album. We wanted to show our appreciation for the fans who have supported the band over the years. There will be some live shows in 2012 as well. As you can see I like to stay busy [laughs]. 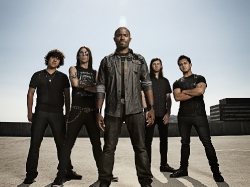 GE: Moving on, let’s talk about Park Lane’s debut – Letters from the Fire. Tell me about the
recording process of the album? How did that go for the band?
Coma: Most of the music was recorded by the time I flew out to California, so we ended up focusing on vocals for about 15 days. We were constantly bouncing ideas off of each other. Every lyric and melody line was put under a microscope. It felt like we were a group of mad scientists writing the soundtrack to the apocalypse [laughs].

GE: How did the Letters recording process differ from albums you’ve been a part of in the past?
Coma: This was the first time I've ever recorded an album on the west coast. It was pretty cool.
I went out there to bare it all in a vocal booth, in front of a group of guys who were still getting to know me and vice versa. It was a great experience.

GE: Let’s talk about producer Michael Rosen. Tell me what it was like to work with him, what did you see in him to bring him on board and what did he bring to the table in the studio?
Coma: The guys brought Michael Rosen into the picture about a year before I joined the band. He helped to refine the Park Lane sound. He also helped with making sure that the listener would understand the message that I was trying to convey in the songs.

GE: You’ve always been such a powerful, magnetic songwriter – dating back to your time in
Candiria. With this new album, what inspired you to write it?
Coma: Thank you. I was inspired by the human condition. The music that was handed to me to work on was the canvas I used to express myself as an artist. I just listened and allowed the song write itself.

GE: With that, is there a central or running theme on this album?
Coma: "Letters from the fire" says it all. It represents what we and the fans have gone through emotionally, physically and spiritually. How we deal with our trials and tribulations now will help to define who we are in the future.

GE: Can you tell me a little about lead single “the Edge?” What’s the song about and what caused you to choose it as the album’s debut single?
Coma: "The Edge" is about resisting the urge to end it all when the burdens of this life become too heavy. I've been there myself and so have some of my friends, not all of them made it though. Hopefully the song can help out anyone who is struggling with that issue. 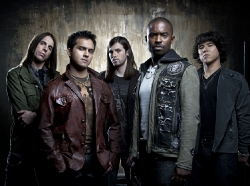 GE: With Letters, what can fans expect to hear on this album?
Coma: They can expect to hear some hard rock, metal and even a hint of country [laughs]. We're willing to try anything as long as it's an honest representation of who we are as a band.

GE: Anything else you’d like to add? The floor is yours.
Coma: I wanted to let our fans know that we love them and appreciate all that they have done for us.
Go in search of what you're re passionate about and hold on to it as long as you possibly can. We will never be the great of anything by playing it safe.
Email Post
Labels: interviews park lane