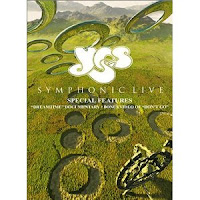 Building off the concept from their 2001 release Magnification, Yes’ Symphonic Live DVD release is exactly as it sounds – Yes backed by an orchestra, the European Festival Orchestra Conducted by Wilhelm Keitel to be exact. For the most part things are fairly pedestrian here on Symphonic Live, but the trio of Jon Anderson, Steve Howe and Chris Squire are able to shine throughout (until that is, Anderson attempts to hit the highest of notes, and then things get messy). While Symphonic Live consists of a good amount of recognizable material ("Starship Trooper," "And You and I," "Long Distance Runaround," and "Roundabout"), its newer cuts (“Don’t Go,” “In the Presence Of”) come off as mere filler in the grand scheme of things if you aren’t a serious Yes fan, but “Owner of a Lonely Heart” should appease the masses and casual listeners who happen across Symphonic Live.

The bonus content is underwhelming as there is only two things of note offered, a video for “Don’t Go” and a “Dreamtime” documentary, which is actually a behind the scenes look at the creation of the show and the influence of Magnification on the older material

Symphonic Live is good, not spectacular, but is still interesting and intriguing enough to warrant watching it.