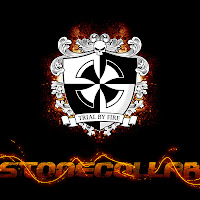 South Africa. Yes, South Africa, you read that right – Cape Town to be exact. That’s where Stonecollar calls home, and their hard-hitting debut Trial By Fire is evidence that South Africa knows how to rock. This high-powered debut is testosterone-fueled rock and roll with a gritty lean, highlighted by sharp, piercing guitar work from the talented duo of Sean Tait and Clinton Jurgens and an overwhelming and memorable vocal performance from frontman/bassist Léshem Petersen, who sounds eerily, yet incredibly similar to Systematic’s Tim Narducci. “Turn A Blind Eye” could easily be mistaken for a b-side off Systematic’s excellent 2001 release Somewhere to Burn – hell, it might just be the best song Systematic never wrote.

Trial By Fire is an out-and-out old-school guitar rock revivalist effort, one driven by towering melodies and chugging riffing that harkens back to those that came before (“Trial By Fire,” “SQT,” “Unnatural Selection,” “Dying Breed”). The albums most badass guitar work can be found on the excellent track “Say Your Prayers,” a song rife with swirling guitars, a superb instrumental bridge and a high-arching hook, that has potential single written all over it. The band even showcases their balladeering chops, showing they can still hang with the big boys when they tap the brakes and temper the pace of Trial By Fire (“…As the Crow Flies”).

Trial By Fire is a strong release and perhaps as good as you can get on a debut record. Stonecollar could make an impact in the underground rock game pretty easily if they were to come stateside, but for now, they’ll have to settle for the fact that they’re probably the best hard rock band in South Africa. That’s not too shabby a distinction.