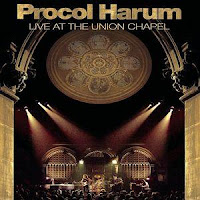 Procol Harum Live at the Union Chapel is as straight-forward as concert DVD releases come – no frills, all performance, though this one isn’t without its flaws. No, the flaws aren’t exactly what you would call fatal; it seems as if this release is more a product of its environment than anything else. The Union Chapel, a small Gothic chapel in the borough of Islington in Greater London, as majestic as it is, presents issues when it comes to overall sound quality. Still, it’s not so bad to make you stop watching a concert that features more than its fair share of new material – well, new in the form of 2003 and the bands release The Well’s On Fire. The newer songs, tracks like “An Old English Dog,” “Every Dog Will Have His Day,” “Wall Street Blues,” “VIP Room” and “Weisselklenzanacht (the Signature),” resonate just as well as a Procol Harum classic like “A Winter Shade of Pale,” which predictably closes out the show. But therein lies the problem – since pretty much a third of this performance is dedicated to the newer songs, casual listeners might find themselves lost when the band isn’t performing hits.

The slate of extras isn’t all that bad. There’s an interactive interview with singer Gary Brooker as well as a couple of montages including one from the band earlier in the day, a seven-minute fast-motion video montage of set up for the show. Fans also get their chance to add their two cents in the extras section, as fans at the bar in Union Chapel discuss their impressions of the concert, the new album, and how they originally got into Procol Harum.