Reviewed! The Pretenders - Loose In L.A. 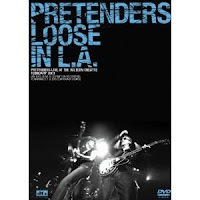 The Pretenders
Loose in L.A.
Eagle

Set lists are always a point of contention, as is the case of the Pretenders’ Loose in L.A. DVD, though the song selection here might be more a product of timing than anything as this performance was filmed during the bands tour in support of their 2002 release Loose Screw. So, as you might expect, you’re getting a lot of songs off of that record (“Lie To Me,” “Time,” “You Know Who Your Friends Are,” “Nothing Breaks Like a Heart,” “Fools Must Die”), though the band offers up a number of other hits as well throughout the night’s proceedings (“Message of Love,” “Talk of the Town,” “I’ll Stand By You,” “Brass Pocket,” “”Mystery Achievement”). On the whole, the Pretenders’ seem reserved, somewhat laid back in their approach, but it doesn’t take anything away overall because Loose in L.A. is an enjoyable event. Loose in L.A., technically speaking, is near flawless, as it’s increasingly evident that Eagle Vision not only know what they are doing, but also that they seem to be getting better with each release. Both the video presentation and the sound quality are impeccable. And sure, there’s some bonus content, though it’s not worth mentioning for the most part. You’ll get a music video (“You Know Who Your Friends Are”), as well as a concert montage and some backstage footage, and to be honest, if you blink you’ll probably miss it, and you won’t be missing much. All in all, Loose in L.A. isn’t the best the Pretenders have been whilst onstage, but it surely isn’t the worst, rather, it’s definitely somewhere in-between.