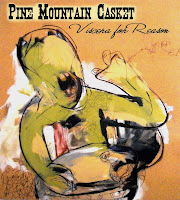 Pine Mountain Casket’s Viscera for Reason is something of a sonic chameleon, effectively blending elements of indie, hard rock, alt-country, folk and Americana into one sound the band themselves describe as “eclectic.” Though PMC hail from Los Angeles and not somewhere in the American Midwest, as the sound emanating from their debut indicates, Viscera for Reason is something of an emotional journey cleverly interspersed with jangly guitars, rattling melodies and rambling travelling troubadour vocals that could very easily slot in next alongside the Decemberists, Drag the River and Johnny Cash on the soundtrack to your next night of drinking (“Oildrips,” “Demons Croon for the Mississippi Moon,” “Bird On Trees (Or the Solid Ground”). To the naked eye it might seem as if Viscera for Reason is just merely a rich, heaping portion of Midwest Americana, but it actually has a bit of pep in its step. As the track “Serpents Prayer” shows, the band can bounce just as well as they croon thanks to a wealth of playful guitars and big hooks. The song opens the albums closing triumvirate of songs, the strongest such collection of tracks off Viscera for Reason. Rounds of whiskey shots abound on “Race to Oblivion,” a great contemplative drinking song (‘I don’t need time to think this over/just the whiskey to wash it away), and the rousing, and excellently titled, closer “I Think We’re In for A Watery Grave” is by and large the albums best cut, infusing modern hard rock structures with an indie feel, a track full of strong soloing and tremendous vocals that might actually be a step above many of today’s modern hard rock singles. Viscera for Reason is sturdy and reliable, making for one hell a debut record that needs to be heard.