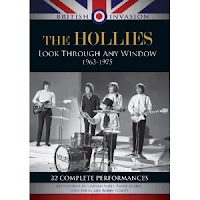 Nostalgia is the name of the game on the Hollies Look Through Any Window 1963-1975, a retrospective DVD release that features a whopping 22 full television performances from the legendary group from the 60’s and 70’s. And let’s get this out of the way early, if you are a fan of the Hollies, either dedicated or casual, Look Through Any Window 1963-1975 is an absolute must-own. As far as the TV performance side of things here, many of the bands timeless singles are documented, including, but obviously not limited to, songs like “Look Through the Window,” “I’m Alive,” “Long Cool Woman In a Black Dress,” “The Air That I Breathe,” and “Sorry Suzzane,” but viewers need to bear in mind that the TV performances represent only one aspect of Look Through Any Window 1963-1975. There are new interviews conducted with each member of the seminal group, including Graham Nash, as well as Allan Clarke, Tony Hicks and Booby Elliot, and when combined with the television clips, add an overwhelmingly interesting element to the DVD. The bonus content is also excellent, and even though it includes backstage footage and behind-the-scenes videos from the bands’ heyday, it’s the incredibly rare footage from 1967 that finds the band playing at EMI/Abbey Road Studios. Sure, it only runs tens minutes or so, but still, it’s still worth watching. It has been said, but just like the music, just like the memories, and just like this footage, the Hollies are indeed timeless.