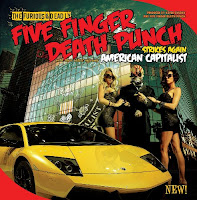 By now, we all know, or should know at the very least, what Five Finger Death Punch is all about. The band makes no bones about who they are sonically, and their latest release, American Capitalist, is proof positive of that. The pop metal merchants know what they are doing, which is why even though American Capitalist is pretty much more of the same, it’s still enjoyable.

First off, if you’re looking for anything close to progression or any sort of changing of the guard in terms of sound, you are most definitely looking in the wrong place. Continuing the pace from their previous release War Is the Answer, American Capitalist picks up right where the band left off, following much of the same formula and structure that got them to where they are today – agg-metal verses followed by soaring, melodic choruses and vice versa. Yes, vocalist Ivan Moody is as good as he has ever been, and drummer Jeremy Spencer remains a steady beast behind the kit, though for the most part, American Capitalist shines its beacon on the guitar tandem of Zoltan Bathory and Jason Hook, who ring in the new record in style with some of their best shredding and soloing on the title track, before giving way to one of the bands most viable singles yet in “Under and Over It.” “Menace” returns FFDP to their driving, punishing ways, though it’s the albums lighter moments, the slightly less-heavy ballad-esque moments (“Coming Down,” “Remember Everything”) that allow Moody to flex his vocal muscles even more so than during the albums towering, rampant hooks.

Unfortunately, for every standout track, there’s senseless filler, tracks like “Wicked Ways” and “100 Ways to Hate,” full of ludicrous, preposterous, and above all else, disposable, songwriting and recycled riffs, which do their job in dragging the work as a whole down.

No, American Capitalist isn’t quite beating a dead horse, but by now we all get the gimmick, and as long as the band can continuously go back to the well to reinterpret pretty much the same sound while keeping things enjoyable, or perhaps more importantly, marketable, then a band like Five Finger Death Punch will always have a future. The bottom line is, if you find yourself a fan of pretty much any of the bands prior work, then you’ll find yourself easily a fan of American Capitalist.