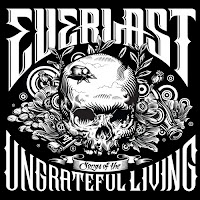 On Songs of the Ungrateful Living, Everlast’s sixth studio release, the former House of Pain frontman is a little older and a little wiser, which certainly shines throughout the record as Whitey Ford has moved away from a lot of the hip-hop from his last full length, 2008’s Love, War and the Ghost of Whitey Ford, and toward more an alt-country, acoustic feel, a sound right in Everlast’s wheelhouse.

Everlast is a powerful songwriter and even better storyteller, one capable of evoking an emotional response at each and every turn. This is a real life record, one that reflects the trials and tribulations we face daily. Plain and simple, these lyrics, these words, these thoughts, are relatable.

Songs of the Ungrateful Living might just be his best showcase as a solo artist yet, an under-the-radar record that you’re much better off experiencing rather than simply reading about. If you liked 1998’s Whitey Ford Sings the Blues or 2004’s White Trash Beautiful, there’s a pretty good chance you’ll like Songs of the Ungrateful Living ever more.