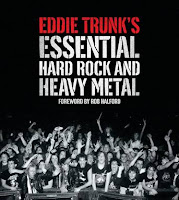 As if radio host, frequent concert-goer, resident fountain of hard rock and heavy metal music knowledge and host of VH1 Classic’s hit TV show That Metal Show isn’t enough for Eddie Trunk, you can now add author to that list as he has released a new book in Eddie Trunk's Essential Hard Rock and Heavy Metal, a book consisting of profiles/stories/pictures/info on 35 different influential hard rock and heavy metal artists.

Boasting scads of rare photos from the lens of Ron Akiyama and a foreword by the Metal God himself Rob Halford, Eddie Trunk's Essential Hard Rock and Heavy Metal is nothing short of a literal page turner and a must-read, essentially the book equivalent of downing a few pints with Trunk himself as he regales you with story after story that you need to hear, or read in this case, to believe. Now, some of the 35 bands featured here are as you would assume – KISS, UFO, Twisted Sister, Judas Priest and AC/DC, though there are some you might not expect as well –Led Zeppelin, Tesla and Poison. Trunk even offers an additional section titled “More Essentials” which spotlights a number of other bands who narrowly missed the cut, such as Kix, Extreme, Night Ranger, Quiet Riot and Cinderella. The “More Essentials” section also features a short blurb on Blue Murder, which is surprising given Trunk’s love for the band and  their two LP’s (1989’s self-titled and 1993’s Nothin’ But Trouble), as well as his constant urging for guitarist John Sykes to get the band back together. Still, that’s pretty much nitpicking – but while we’re at it, hey Eddie, a Fozzy shout out would have been nice.

The true selling point of Eddie Trunk's Essential Hard Rock and Heavy Metal isn’t the band’s bios, discographies or Eddie’s own personalized playlists, and while the photos are pretty killer in their own right, it’s the personal stories Eddie shares that drive this book. Whether its Trunk sharing the story of seeing KISS when he was 13 years old (his first concert) and how he was obsessed with them at a young age (and still is), and how a passing ‘joke’ by Halford during a radio interview that Trunk didn’t think anything of led to his 25th anniversary in radio party which featured an intimate performance by none other than Priest themselves, or Eddie speaking from the heart about the passing of friend Ronnie James Dio, whom Eddie, who spoke at Dio’s funeral service, said “for as great of a singer as Ronnie was, he was an even better person, and that’s really saying something.” The “Did You Know?” and “Underground Classic” sections are not to be missed either.

If you call yourself a fan of hard rock and heavy metal, Eddie Trunk's Essential Hard Rock and Heavy Metal is a good you absolutely need to own.