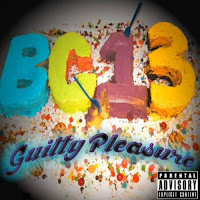 Returning to the well for another cash-grab via some sloppy crunkcore, or s**tcore, Brokencyde is back with Guilty Pleasure, much to the chagrin of people with ears everywhere. Mixing screamo vocals with hip-hop beats isn’t anything new, and yes, while a group like Breathe Carolina should come to mind here, it would be going too far to even call Brokencyde a poor man’s Breathe Carolina.

Listen, if you’re looking for anything of substance on Brokencyde’s latest, Guilty Pleasure, you’re definitely looking in the wrong place. If Guilty Pleasure is anything, anything good at least, it’s semi-fun, frivolous and devoid of anything real. In fact, most of the time, it’s the band members alter-ego’s running the ship, or the inmates running the asylum as it were -  Se7en, Mikl, Phat K and Antz, and not actually the real members, if that makes any sense at all.

Aimed squarely at kids who shop at Hot Topic to scare their parents, Guilty Pleasure is about as tame as mall-core gets. Awful songwriting aside, Guilty Pleasure is a baker’s dozen of the same exact track, save for a few, very few, tracks worthy of mention. On the whole, Guilty Pleasure offers a heaping mountain of auto-tuned vocals that become tired by the time you get to Paul Wall’s ironic guest spot on the third track, “Phenomenon,” which is laughable in thinking just how far this guy has fallen. It was only six years ago he was primed to breakout, teaming with Nelly for the single “Grillz,” before seeing his 15-minutes of fame vanish, appearing with Brooke Hogan for the song “About Us” the next year, and now Brokencyde. Poor guy. “Doin’ My Thang” and “the Party Don’t Stop” are passable, but it’s the penultimate track “U Mad Bro?” a track fired off at haters of the band in which the band addresses their "haters," suggesting that the only reason that people would dislike the band would be because they had relations with said haters' girlfriends, that stands out. It’s worth a listen and a hearty laugh.

Honestly, Brokencyde has more than its fair share of haters – hell, they might be the most hated band on earth outside of Insane Clown Posse, which is something the band seems to embrace time and time again – they might even get off on it. With Guilty Pleasure, simply put – listen at your own risk.

Hello everybody!
Do you get bored with the default ringtones of your mobile phone? And you want to change those boring ringtones? I will suggest to you the list of the best ringtones for mobile phone, you can consider to download to your phone.

These are some popular ring tones. All ringtones are downloaded for free. You can also find other unique ringtones at: https://bestringtonesfree.net/

Here are the most recently downloaded songs, just download without wasting time: