Reviewed! As I Lay Dying - Decas 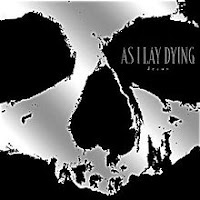 Assembled as a gift to their hordes of fans for their undying support throughout the last decade, support that propelled the band to heavy music’s echelon to the tune of over one million albums sold, As I Lay Dying’s Decas is choppy at best, an album that real feels like a compilation. It can be a challenging listen at times due to its different sections, but for those who bear down and accept the challenge will be pleasantly rewarded with a number of high quality covers, album worthy b-sides and one or two worthy remixes, though the latter might not be a casual AILD fans cup of tea. Regardless, there good enough to warrant a listen.

You’d be wise to take a moment to stretch before setting your sights on AILD’s cover of Slayer “War Ensemble” because you might get hurt if you’re not limbered up. This sonically dexterous rendition is quite the adventurous undertaking. The band re-recorded medley of “Beneath the Encasing of Ashes” sounds like a cut culled from the latter stages of Frail Words Collapse (though its actually the lead track from their 2001 release of the same name), which might be Decas’ best track. The two Judas Priest covers, “Hellion” and “Electric Eye” are out and out shattering as the band does their best Priest impression by letting their blistering guitar tandem of Nick Hipa and Phil Sgrosso get out into a full gallop – turning these covers into track meets, fire-spewing monsters that do nothing more than unleash hell in the form of guitar licks as razor sharp as barbed wire. Just be careful – you’ve been warned.

And speaking of, it’s the first of a slate of remixed tracks, “the Blinding of False Light,” cut and scratched by Innerpartysystem, that registers as the best of the bunch, a dub heavy mix with deep, cavernous bass drops that bleed in serene steady 8-bit euphoria before ultimately giving way to waves of crashing brostep that subtly fades. Ben Weinman’s remix of “Wrath Upon Ourselves” is pure and utter chaos and not in a good way. It’s a scatterbrained mix of noise that sounds as if your CD is skipping more than anything else.

Sure, things might be a bit irregular, making for a jerky and rough listen, but with Decas, if you take your time and work your way through the album in sections, you’ll see there’s a lot worth listening to here after all.