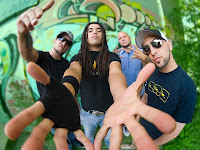 After years of performing together, Nonpoint have confirmed that the band will be moving on without the service of guitarist Zach Broderick and founding member bassist Ken MacMillan.

Founding members frontman Elias Soriano and drummer Robb Rivera will continue writing with new members for the forthcoming new Nonpoint album, which is slated for a 2012 summer release. Ken and Zach are currently involved in a new project that will be announced within the immediate future. Both parties wish to thank their fans for their continued support over the years.