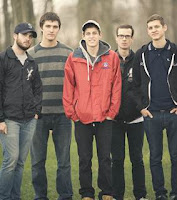 Razor & Tie announces the addition of the Rochester-based melodic hardcore/punk act Such Gold to its label and publishing rosters. The quintet is already knee-deep in the writing stages of their new album to be produced by Steve Evetts (Every Time I Die, Saves The Day, Lifetime, The Dillinger Escape Plan) and set for release in Spring 2012.

"Razor and Tie is definitely the right fit for Such Gold. They are a label that believes in us, and will support us in whatever we do, which was the main priority for us in making this decision," says Devon Hubbard bassist for Such Gold.

John Franck, Senior Vice President of Marketing for Razor & Tie comments, “Such Gold is a special band. In just two years, they've grown as songwriters, toured the world and quickly generated major respect in their scene. They have a bright future, one which Razor & Tie is excited to be a part of."

Such Gold formed in 2009 and have reaped the rewards of their tireless efforts by releasing two EPs, Stand Tall (2009, Mightier Than Sword Records) and Pedestals (2010, 6131 Records). The band also released music on a split EP with Into It. Over It., and have another split EP with A Loss For Words slated for a late November release on Mightier Than Sword Records & No Sleep Records. Fans of Such Gold have been attracted to the band’s pop-punk stylings as the young group marries their love for old school pop-punk, hardcore and indie rock. Such Gold is Ben Kotin (vocals), Nate Derby (guitar), Skylar Sarkis (guitar), Devon Hubbard (bass) and Devan Bentley (drums). The band is managed by R.J. Crowder-Schaefer at Mightier Than Sword and represented for touring by Tim Borror and Phil Battiato at The Agency Group in North American and Ed Sellers at Primary Talent International for the rest of the world.

Such Gold is the latest addition to independent label Razor & Tie’s expanding Rock roster that includes such artists as Saves The Day, Hit The Lights, Kevin Devine, All That Remains, Norma Jean, For Today, Chelsea Grin, Attila, Vanna, and many more. The New York City-based label is one of the fastest growing independent record companies in the United States, and has garnered both Platinum sales and Grammy awards in its 20-year history.
Email Post
Labels: razor and tie signing such gold