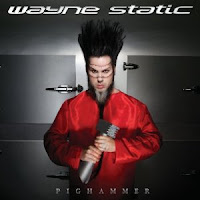 While Static-X might currently be on hiatus, frontman and brainchild Wayne Static sure as hell isn’t, and we are all the benefactors of that. With his day currently on hold, Static is looking to the future and doing so as a lone wolf, and his debut Pighammer, is the product of such a lone venture. Sure, with Pighammer, a solo cut from the man at the helm of each and every song Static-X ever put down on record, you probably already know what you’re getting into ahead of time. While a majority of this record should sound old hat and come off mostly as recognizable, Static still manages to unleash a number of tricks stored neatly up his sleeves.

Pighammer picks up right where Static-X left off with 2009’s Cult of Static, treading water between familiar sounding pulsating industrial stompers (“Around the Turn,” “Assassins of Youth,” “Slave”)  that sound plucked from the cutting room floor of X’s absolutely brilliant 1999 debut Wisconsin Death Trip, and plodding guitar-driven sludgefests (“Get It Together,” “Shifter,” “the Creatures Are Everywhere”), though there are moments where Pighammer steps outside the box a bit, opting for more an electronic-laced sound fueled by a combination of ripping staccato guitar bursts and atmospheric noise capped off by Static’s trademarked barked vocal delivery (“Thunder Invader,” “Static Killer,” “She”). The grooves are deep and intense; another reason Pighammer is a success.

Sure, Pighammer might rely a bit too much of the art of repetition, and while some of these rhythms tend to be a bit recycled the deeper and deeper you delve into Pighammer, the fact remains that no matter how close to each other some of these songs sound, there are still nothing short of enjoyable.

Suffice to say, Pighammer is a killer of a debut from Static. Hell, Pighammer would be one kick ass new Static-X record. The band could get back together at any time, so it might be in our best interest to enjoy the solo offerings of Static while we have them. Well, as long as Static is writing and making music, we’re all better for it.