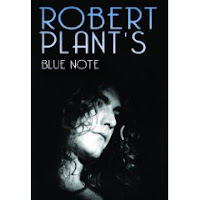 Clocking in at nearly three hours (157 minutes to be exact), Robert Plant’s Blue Note is an actually intelligent look into Robert Plant, the man. No, this isn’t another mindless Led Zeppelin lovefest either – it’s a release that takes the time to peel back the curtain on Plant himself and his influences.

Robert Plant’s Blue Note spans the length of Plant’s tenure in the music world, from his beginnings as a teenager to his 2010 recording sessions with Nashville artists, and compiles one of the most comprehensive examinations of Plant’s career ever assembled and set forth on DVD. It accomplishes this feat by taking the time to look at Plant’s biggest influences from throughout his career, and includes rare film and audio clips of such artists as Mali group Tinariwen, Egyptian singer Oum Kalthoum, and Delta blues singer Son House. Obviously Robert Plant’s Blue Note wouldn’t be proper without time spent on Zeppelin, though it is refreshing because for once, they are not the main focus. The DVD features clips from a 2010 interview with Plant as well as interviews with some of his biggest collaborators - guitarist Robbie Blunt, producer Phil Johnstone, and Egyptian singer Hossam Ramzy. His adventurous solo releases are discussed at length, from 1983’s the Principle of Moments and 1988’s Now and Zen, to 2006’s Mighty Rearranger and 2007’s Raising Sand.