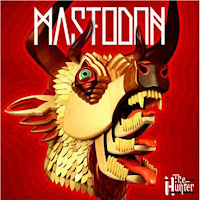 Though Mastodon have clearly scaled back the epic factor a few notches on their latest full length the Hunter, meaning this new slate of songs features less wandering and less mountainous meandering, the band’s core dynamic remains unphased. Blistering duel guitars and crashing waves of thunderous drumming still rule the day throughout, it’s just that now on the Hunter Mastodon handles their business in a more focused manner – in about five or six minutes as opposed to 12 or 13. Through the portion size may be a tad smaller; the Hunter still delivers like a seven course meal rather than some mere ala carte entrée.

Mastodon doesn’t take long in making it obvious that with the Hunter they mean business as opener “Black Tongue” hits like a tidal wave, employing razor-sharp guitar leads that fuel overwhelming anthemic moments, proving early that the band has lost nothing since their 2008 release Crack the Skye. The Hunter delivers the heavy again and again, unleashing towering riffs and an unmatched blazing guitar attack (“The Octopus Has No Friends,” “Curl of the Burl”), though from time to time the band tosses a monkey wrench into the works via keyboards and clean vocals (“the Creature Lives”). The late comer “Spectrelight,” a track that features the help of Neurosis’ Scott Kelly, challenges for the title of most heavy, and those looking to consume every last second of the Hunter will be rewarded thusly in the form of the album’s most brilliant solo, which comes on the closing track “the Sparrow.”

While in the grand scheme of things the Hunter might be a better fit in a commercial setting rather than hard rock’s seedy underbelly, there’s no denying that Mastodon has effectively and decisively ascended to the throne of modern hard rock/metal, a seat they seem primed to occupy for years to come.