Reviewed! Machinehead - Unto the Locust 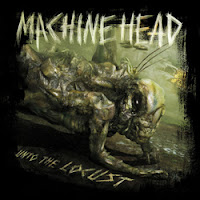 Machinehead
Unto the Locust
Roadrunner

Upon first glance, one might assume that Machinehead’s latest, Unto the Locust, is an EP. Sure, all the tell tale signs are there since the album is only seven tracks long, but as they say, don’t judge a book by its cover – rest assured it’s a full length, something you’ll realize as you’re still listening close to 50 minutes after you press play. And since this is a Machinehead album, you should know what you’re in for  – blistering guitar leads, gravel throated vocals, punishing drumming – but this time around the band seems content on sonically stepping outside the box, beyond the chalk lines as it were, allowing themselves to be more apt to taking chances. Sure, the core sound is there, and that’s why you’ll buy this record, but the fact that Robb Flynn and the boys are open to experimenting tells us that this band has plenty left in the tank and that there somehow is room for them to grow.

Speaking of chances, one is taken right off the bat with the three part opener “I Am Hell (Sonata in C#),” which finds the band balancing vocal moments that toe the line between a cappella and operatic – yes, operatic (“Sangre Sani”), sludgy grooves (“I Am Hell”) and melodic thrashing (“Ashes to the Sky”), all throughout the course of one song. From there on in, Unto the Locust continues to bombard listeners and rain down upon them bombastic and galloping, track meet style guitars reminiscent of late-80’s Metallica (“Pearls Before the Swine,” “This is the End”), progressive, chugging melodies that register in the long run (“Be Still and Know,” “Locust”), though Unto the Locust is not without some perplexing instances, namely the avant-garde “Darkness Within.” There’s a reason band members were mum when it came to describing this track prior to the album’s release – it definitely needs to be heard, not read, so you can make your own conclusions. Um, it’s different to say the least.

Unto the Locust is the product of Machinehead feeling comfortable in their own skin; they know who they are as musicians are know exactly what they are capable of, and as such, this record is overtly confident in nature. Unto the Locust isn’t just good, it’s the best the band has sounded perhaps ever, and for those of you who spent time with their last release, 2007’s tremendous the Blackening, that’s truly saying something.