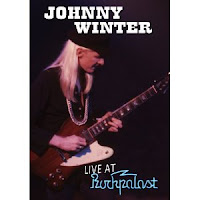 Though not as fair a representation of Johnny Winter’s musical repertoire as his Live Through the 70’s release, Live at Rockpalast is an adequate portrayal of Winter’s ability to play the blues, something he seemed hell bent on proving to the German audience in attendance on this night (read the liner notes for more info on this). Almost completely devoid of any of Winter’s most well-known works, Live at Rockpalast features more than a handful of blues covers (“Suzie Q,” “Jumpin’ Jack Flash”), though quite often these mere cover tracks turn into extended blues-rock improvisations, which tend to wear on as the performance progresses. Still, Winter’s guitar prowess is near immaculate, as its clearly evident the man knows what he is doing when there is a guitar nearby (“Walking By Myself,” “Divin’ Duck”), and Live at Rockpalast is at its best during “Medley,” when Winter goes from honoring Robert Johnson to Leadbelly to Muddy Waters throughout the course of one track. Still, the performance here though is bogged down by little things, be it the ramped up lengths of the tracks or the bands need to switch instruments between songs (“I’m Ready,” “Rockabilly Boogie”). And even though Live at Rockpalast is probably best suited for fans of Winter, it’s still a quality performance from one of the best guitarists of all time, though non-conventional fans are best to begin elsewhere when it comes to experiencing Johnny Winter in a live arena. While Live at Rockpalast is uneven at times and doesn’t exactly find Winter at the top of his game from start to finish, it’s still worth a look.