Reviewed! Counting Crows - August and Everything After - Live at Town Hall DVD 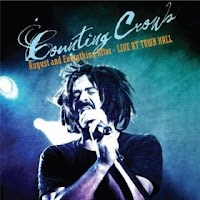 Frontman Adam Duritz delivers a captivating and dominating performance throughout the course of August and Everything After – Live at Town Hall, as you’ll quickly remember why this album was probably your favorite or one of them at one point in time. His performance is excellent to say the least, and you’ll be singing along to every song for sure.

As for bonus content, not much to speak of, but the DVD release makes it count as the in-depth conversations with Duritz and Charlie Gillingham are both informative and entertaining.

August and Everything After – Live at Town Hall is excellent to say the least. You do not have to be a Crows fan to appreciate this one – it is a gem for pretty much anyone.