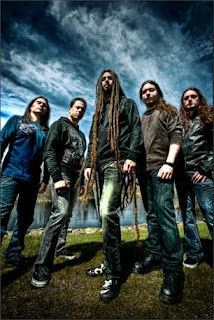 Razor & Tie announces the addition of 2-time Grammy-nominated metal act, Shadows Fall to its label roster. Shadows Fall joins Razor & Tie for an exclusive, multi-album, North American deal. This week, the band begins recording on a new studio album at Zing Studios in Westfield, MA. The band’s seventh official studio record (slated for release spring of 2012) sees the band reuniting with long-time friend, producer/engineer and Killswitch Engage/Times Of Grace guitarist, Adam Dutkiewicz. Adam D., who has previously helmed the boards on albums by All That Remains, As I Lay Dying, Unearth, The Devil Wears Prada, and Every Time I Die, is also intimately involved in the writing of the new Shadows Fall material.


Shadows Fall will continue to offer fans a fly-on-the-wall perspective of their recording sessions. Additional streams are scheduled for October 19th and November 9th at 5pm exclusively on Livestream.com. The band will also turn the video stream on intermittently while in the studio. Follow @ShadowsFallBand on Twitter or visit Facebook.com/ShadowsFall to learn about future streams.

"We haven't had this type of fire underneath us to make a record in a long time. I feel that with our new partnerships in place, as well as bringing Adam D on board to produce, together, we’ve brought a renewed life to the band which will result in the best Shadows Fall record to date," commented Shadows Fall drummer Jason Bittner.

"Shadows Fall is very excited about our new partnership with Razor & Tie. The music industry has been in such a constant state of flux these days, it takes a progressive approach and a willingness to rethink the antiquated business model in order to achieve the success we still long for and desire. Razor & Tie is a company that embraces this idea and understands what it takes to promote and support a band in today's market place. We are looking forward to working with a team that not only understands our band, but also has the knowledge and desire to help us achieve our goals,” adds Shadows Fall lead vocalist Brian Fair. “Shadows Fall has always been a band that tried our hardest to not be confined by the restraints of a single sub-genre of metal. We cover a ton of ground on this new album-- encompassing everything we have done musically over our career and incorporating new ideas into the mix. Our influences are an eclectic mix that cover the full spectrum of heavy music and it's always been our goal to combine those ideas into our own unique sound that is constantly evolving. The songs on this forthcoming new record reflect that goal to the fullest."

Formed in 1996, Shadows Fall emerged from Springfield, Massachusetts in 1996 as a D.I.Y. band that ultimately found legions of fans, worldwide fame, Grammy nominations, and rock radio success. The band has released six studio albums, two DVDs, a collection of B-sides and one Greatest Hits compilation, selling over 770,000 to date and has had music featured on the hugely popular video game series Guitar Hero. With the band’s sound often described as having an unmistakable, seamless blend of metal and hard rock, Shadows Fall has grown to help define the very essence of modern aggressive music, showcasing their distinctive mix of bone-splintering aggression and melodic nuance. The quintet’s last studio album, Retribution, was released in 2009 to critical acclaim.